Ockham trims away the unnecessary entities posited by other scholastics with his famous Razor principle. 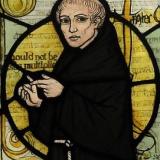 271. Do As You’re Told: Ockham on Ethics and Political Philosophy 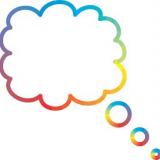 273. What Do You Think? Ockham on Mental Language

• A. Maurer, The Philosophy of William of Ockham in the Light of its Principles (Toronto: 1999).

Thanks to Susan Brower-Toland for help with this episode!

Nominalism is hard to understand

Assume that there is an island in the middle of the sea on which there are eleven different objects: two persons: John and Mary, three wolves, four cherry trees, and two water springs..

Assume John and Mary had a son and they named him Tim..

In time, Tim will learn that John and Mary form a separate group, and put a name on them which in our language corresponds to "human"..

He will put a separate name on the three wolves, which in our language correspond to "wolf".. He will similarly give a common name to the four cherry trees and the two  water springs...

Tim will never group one of the wolves, two of the cherry trees, John and one water spring together and give them a name.. Actually, there is 11! possible groupings, but Tim will only pick one among them, and will discard the rest..

Where does timmy get his cues when he juct picks one particular grouping/naming among millions of possible ones?

If the external objects themselves suggested to Tim how they should be grouped, then we arrive at realism..

Let us return back to "we have humanity when we think all the humans indifferently". But to be able to do this we must have already succeeded in classifying some of the objects around us as "humans" and distinguished them from the rest. We cannot do this without the forms, ie, the objects "telling us" somehow what they are..

Last note: Not only humans but other mammals can also perceive forms. A mouse clearly has the concepts of cat, water and cheese.

Yes, that's exactly the sort of argument that motivates realism, but it is not quite so easy. The nominalist is able to say that the individual humans have various similarities: for instance each of them is two-legged, unlike the cherry trees and wolves (by the way what are your wolves eating? I am worried about the humans). The two-leggedness of John is a particular quality and so is the distinct two-leggedness of Mary, so there is nothing universal out there, but these are cues that Tim can use when he does the groupings. In fact what he does is generalize from these particular features he can grasp with his senses, and produce ideas that are universal in scope (all two legged things, even those that exist only potentially). Animals by the way cannot do that, on the standard medieval picture: they can only grasp particular properties and react appropriately, without thinking generically.

So the short version of this answer is: if there can be e.g. the particular white in this piece of paper, there is something to give us the idea of white, without there needing to be a universal whiteness out there in the world.

Thanks for your excellent philosophy podcasts, which I introduce to students taking my course in Ancient and Early Medieval Philosophy. My question here is: Does Ockham think that it is sufficient to perceive (sense) in order to produce ideas that are universal in scope, and so grasp an idea? Or does "grasping an idea" require more than sense perception? If he thinks that perception is sufficent for grasping an idea, we then have the basis for (David Hume) the disaster of naive empiricism.

What do you think?

Well, it might depend on the idea but certainly for some concepts yes, we get them through sensation. But that is actually quite standard: following Aristotle's empiricism, nearly all the medieval scholastics think that we get most of our ideas through sensation and the question is how that works. So in this sense Ockham is nothing new; what is new is that he thinks that nothing common or universal is required in the external world and that concepts are the mental acts by which things in the external world are grasped.

Other animals can perceive

Other animals can perceive forms, and can act upon them in complex ways. For example, sheep are able to distinguish between other sheep and people.

However, only humans have the neural equipment for language processing (or rather abstract symbol processing). This is not found in other animals, including the higher order primates such as chimps, orangutans and gorillas.

There has also been a lot of work in language acquisation in children, which has a lot of studies and results. It is probably a better place to start rather than Mediaeval scholasticism.

Interesting you mention that since I am just finishing up co-editing a book on animals in the history of philosophy. The paper in it on the medieval period is by Juhana Toivanen whom I interviewed on the same topic here on the podcast, so you might revisit that: as he explained, the medievals actually take steps torward acknowledging higher mental capacities in animals. Avicenna's theory of estimation is really important here. Using this theory they can certainly explain how sheep differentiate between species for instance. Thus, even though the medievals do pretty much unanimously deny that animals can reason universally, they may not be such a bad place to start!

The debate about Universal Grammar is still live among Linguists, Neuroscientists and psychologists, with Noam Chomsky being the most prominent proponent of Universal Grammar. Also, with your introduction to this episode, it was unclear whether you were going to discuss Ockham or the Sapir-Whorf Hypothesis :-)

I sympathise with you about learning German (a language which I have not yet learned) - but learning Russian was a similar. It has full case system like Latin and Ancient Greek, as well as verbal aspect: but as my Russian teacher pointed out, it is a language used by millions of people of all classes, intelligence and education.

Grammatical gender is fascinating: for example, consider a table. In English it is a neuter, in French - feminine (la table - as in "Le stylo de mon oncle est sur la table."), and in Russian - masculine (стол). So for multilingual speakers, they would agree with Ockham about the mental language lacking grammatical gender - since grammatical gender is simply groups of nouns to which particular rules of grammar attach themselves.

The one I always find strange ie "moon" which is feminine in most languages and also in mythic terms (given the similar duration between the menstrual and lunar cycles perhaps?) yet it is der Mond, i.e. masculine in German.

I have what might be a difficult one to answer.  How does Ockham's concept of universals relate to mathematics?  If i say "the interior angles of a triangle add to 180 degrees", would Ockham say that "triangleness" is unreal, and there are only individual triangles that are similar to one another?  This would suggest that there is nothing fundimental about the angles adding to 180 degrees.  Or would he say the whole of "triangles" are unreal, and there are only material things of a certain shape that are similar to one another that we call triangles?  But this would seem to call into question the whole of mathematics.

That is a great question! Actually there is at least one study of this which is here, and I read it back when I did the episodes on Ockham but my memory is fuzzy to be honest. I think the basic answer is going to be that we are really just talking about items in the supposed Aristotelian category of quantity. Since he reduces the ten categories down to two, namely substance and quality, quantitative terms are going to be "connotative" which means basically that they can be interpreted as just time-saving ways of referring to things like, say, the parts of a substance being removed from one another. Mathematics, I suppose, is going to be a set of mental constructions that are of that nature: abstractions from what is out there in the world, but there will be no mathematical entities like triangles or even lengths in reality, only qualities and substances. 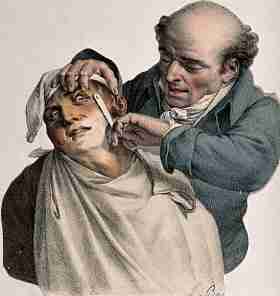