Discussion, debate and denunciation of philosophical attempts to explain the Trinity in Abelard, Richard of St Victor and Bernard of Clairvaux. 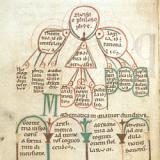 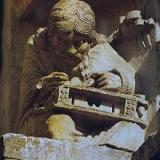 213. On the Shoulders of Giants: Philosophy at Chartres

The Reese's peanut butter cup commerical mentioned in the episode can be viewed here.

Greetings from Bucharest, Romania! I have listened to all your podcasts besides this one, which I will listen to tomorrow. It is not that much of a matter but you should know that the icon that you have just posted with this video is uncanonical, not to say heretical, at least in the Orthodox Iconographical Canon. the Great Moscow Synod/Council in 1666-1667 has declared that any iconographical depiction of the Father is heretical since: "No man hath seen God at any time; the only begotten Son, which is in the bosom of the Father, he hath declared Him." (John 1, 18).

That being put aside, I congratulate you professor for the hard work that you've done with this podcast, especially for the presentation of islamic thought about which we have very few papers here in Romania. I can't wait you getting to byzantine/eastern orthodox philosophy and to indian thought and I hope that you will also cover at least a small part of the chinese thought, about which hieromonk Seraphim Rose said that it is the noblest exemplar of "pagan" thought that exists, nobler even than Plato. God bless!

Thanks for following the podcast! Obviously I would not want anyone to be offended by the images - would something like the Sistine Chapel ceiling also run afoul of the restriction you mention? I guess that there simply is no parallel rule on iconography in the Western Church.

I hope I will get to Chinese too! But let me tackle Indian first...

You are right that there is

You are right that there is no parallel rule in the western iconographical canon. However, the Fathers of the Undivided Church have warned against such depictions of the Father. There are quite a few possible objections to this decision of the Great Moscow Council of 1666-1667. One would be the scriptural quote “The Ancient of Days was seated; His garment was white as snow, and the hair of His head was like pure wool” (Daniel 7:9), which would seem to imply that the Father could be depicted as an old man. Another objection would be that even in the orthodox world, it is quite common to see the Father represented as an old man in different churches and that is why I said it is not that much of a matter that you posted this icon. However, in the seventh century, when the Byzantine Empire held the monothelite and monoenergist heresies, there were only three Fathers that claimed the orthodox position that in Christ there are two wills and two energies: Saint Sophronius of Jerusalem, Saint John Moshu and, of course, Saint Maximus the Confessor. Therefore, even if the churches are full of these icons, since it was not the Father who was incarnated, but the Son, this does not prove that this practice is not a heresy. A last possible objection would be to point to the much loved by the orthodox christians icon of the Trinity of Andrei Rublev. However, even this depiction of the Three Persons of the Trinity as three angels is not a hypostatic icon (as the old man icon is), but it is an eidos icon, a symbolic one, where the three angels only prefigure the Three Holy Persons, that is to say the angels do not have the same hypostasis as the Three Holy Persons, as the old man icon implies with regard to the Father. Anyway, congratulations for this great podcast professor! God bless!

A defence of Bernard of Clairvaux

I will come to a small defence of Bernard of Clairvaux - although I think he was a little thuggish to Peter Ableard.

Unfortunately any history, such as the History of Philosophy without any Gaps, must have gaps in other aspects. In this case, the political situation in Western Europe, particularly France, resembles nothing as what we have today. For example, the country which became the Kingdom of France, was a number of independent regions which held some loyalty to the King of France, and the King did not have direct rule of these regions. These included most of the South of France, Burgundy, Champagne - the Royal Demesne (i.e. the areas under directly rule of the King) was reasonably small and mainly around Paris.

The lords holding lands were not particularly loyal - one just has to see Henry V of England attempting to usurp the French king. The situation was further confused with regions transfering as part of dowies - for example Elenor of Aquitaine and Aquitaine becoming part of the holdings of the King of England. There were wars and crusades over these lands. The one of results of the Albigensian Crusade was that Languedoc came into the Royal Demesne.

As you indicated, there was an explosion of Philosophical ideas and arguments in the 12th century. There was also a huge explosion of religious ideas and challenges. A long lists of movements and sects can be put together, which would include the Albigensians, Beghards, Waldensians, the Poor Men of Lyon, &c. One could argue that St Francis of Assisi was one expression: however, not all of these groups or movements were non-violent. Some had an ideology analogous to the modern group "Islamic State". Most presented a political problem, and many represented a religious problem. Many political disputes used the fig leaf of a religous ideal to gain traction.

By the start of the 13th century, the Albigensians had taken sway over much of Languedoc, and were threatening to spread. This group did not take kindly to Philosophers either.

So perhaps Bernard of Clairvaux was much more in tune into how Philosophical ideas could be translated into the wider world and the troubles they could cause. He was trying to ensure that as the Church was reforming itself, it did not fall apart into thousands of squabbling sects.

Thanks, that's a great post. Maybe you should do a medieval history podcast?

Actually I was trying to approach Bernard in a similarly exculpatory way albeit from a different direction, the point I wanted to make is that despite his persecution of philosophers he shouldn't be pegged as an anti-philosopher; actually he was probably closer (at least in some works) to the mainstream of philosophical theology than Abelard was. But he's a super-complicated figure, who in fact is going to keep popping up in future episodes again just in passing; I think it would take a whole episode or two, in a series less focused on philosophy, to do him justice.

Thanks for that, Bear. When

Thanks for that, Bear. When we talk about medievals burning heretics and such we tend not to be aware that, in some cases, certain heretical groups were an active (physical, not just intellectual) threat to civil society. We could say many things against the practice, of course, but better informed is better informed, whatever your judgment.

More of "what I grew up with"

I've been surprised when learning Judaism that Christianity (although considered enough of monotheism that it's not "idolatry") is understood broadly as being polytheistic. I'm just surprised that Christianity hasn't been filtered through to everyone in American culture at this point. As a kid, I learned that the clover was how St Patrick explained the trinity to the Irish, but I don't know if that's true.

Also something only post-Christianity for me was the realization that the intro of Genesis, using a plural for God, isn't about the trinity as I was taught but reflect how Judaism itself almost definitely started in polytheism.

Bernard does sound more like a politician (a warmongering one) than a philosopher.

I assume that religiously the trinity acts with God in the "aspect of" the Holy Spirit etc, but I guess that's phrasing from other religions, so that's not what they're working with. I'm surprised that the arguments aren't focusing on the roles that the individual members of the trinity are supposed to fill.

For example, with the version of Christianity I grew up, I'd argue like this:

God wanted to create the world and human beings but, being outside of time, knew that this would result in original sin. For reasons I won't get into, this required a savior to sacrifice himself, and the savior needed to be God. So God would appear in the form of Jesus, the son. After Jesus was gone, humanity would need to contact God continually and be helped spiritually, so this required God to manifest as the Holy Spirit. The chain of causality would go God the Father -> God the Son ->God the Holy Spirit. But again, God exists outside of time, so causes and effects happen for God instantaneously. So all three parts of the trinity are present for everything God does, including creation onward.

This is in the Gospel itself - In the beginning was the word (Jesus), and the word was with God and the word was God. So we already have a part of the trinity being God but also existing in a way that can be talked about separately ("with God"). I know they're avoiding biblical citations because they're trying to get there by reason alone, but I'm mentioning it as a confirmation for the line of reasoning of the trinity as I understand it.

But they're also coming from a preconceived notion of God and trying to justify it retroactively as being reasonable, so... I guess I'm explaining the trinity as a starting point, as opposed to arguing that one part of God equals wisdom, etc. For any religion based on a contradiction (many in one), it's meant to be interpreted or meditated on anyway, I think. That's how a Zen Buddhist friend of mine has explained some part of meditation to me, where you're not supposed to find an answer but to focus on the feelings of confusion after the question. But I could be misquoting.

Some background to consider

Thanks as always for the podcasts.  If Reese's really knew what was good for them, they would be sponsors!

Just a couple of background items that I believe are worth mentioning.

1. The Athanasian Creed, which seems to have been around since the 8th century or possibly earlier.  It is not a philosophical work as such but certainly is one of the most extensive statements of the doctrine of the Trinity, specifically addressing the uniqueness of the divine nature and the distinctiveness of the Persons.

2. The Legatio of Athenagoras of Athens (133 - c. 190 AD).  In sec. 10, he presents the doctrine of the Trinity in a way that is surprisingly close to that of St. Thomas Aquinas more than 1200 years later.  The divinity of the Holy Spirit is not emphasized in this section but is brought up somewhat later.

Thank you for your consideration, and best wishes. 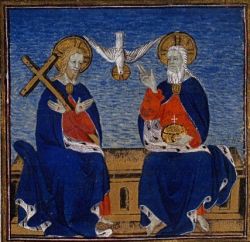